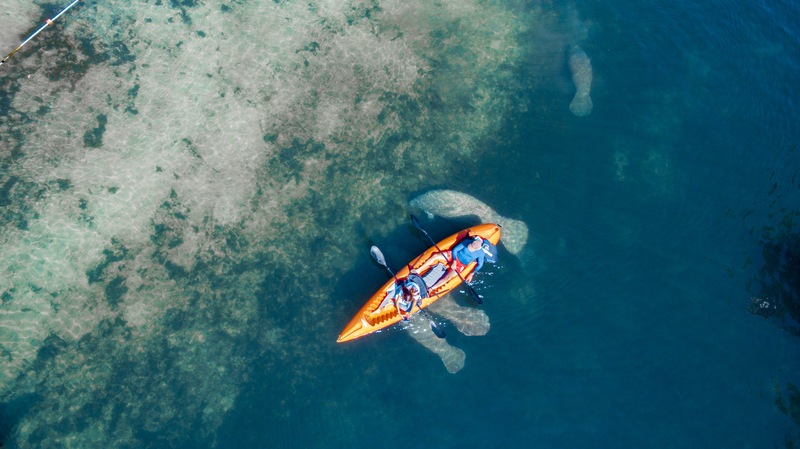 If you’re planning to cruise down south for the fall and winter months on your Blackfin, you’re in some seriously good company! You will be joined not only by fellow seafarers and “snowbirds,” but one of the water’s gentle giants, too—the manatee.

By summer, manatees can be found as far north as the New England coast—but during the cooler fall and winter months, they like to meander down toward balmy Florida for some sunshine and warmer waters. And they are truly something to behold! Read on to learn more about these beautiful creatures, and how you may be able to spot one (or a dozen) on the water this fall and winter. Take a look.

From the Sunshine State’s mangrove-lined Gulf Coast, to the abundant canals, springs and brackish flats a bit farther east, manatees abound here. They are even known to gather around power plants for their warm water! So wherever you cruise this fall and winter, be sure to keep an eye out for gentle giants beneath the surface.

Of course, every so often manatees can be spotted above the surface, too—or at least, their whiskery, leathery noses can! Like any marine mammal, manatees need to come up for air once in a while, and the first sign of them doing so is the appearance of bubbles at the surface. Once you spot this, scan the surface for the sudden appearance of a manatee coming up for air (sometimes, you’ll even hear a funny, bubbly noise as they breathe in!).

Known for the graceful, majestic movements and paddle-shaped tail of manatees’ anatomy (say that five times fast), it is perhaps not surprising that manatees have been misidentified as mermaids in historical accounts—such as that of one Christopher Columbus, who described seeing mermaid-like creatures in the water on a 1493 voyage (they “rose high out of the sea…” but were “not as beautiful as they are represented”). Columbus unwittingly gave us the first written description of a manatee in history.

Manatees’ closest relative is the elephant

So manatees aren’t technically mermaids—in fact, their closest living relative doesn’t even live in the water! That honor goes to the humble elephant, similar in its leathery skin and gentle movements. Manatees evolved from their common ancestor a whopping 50 million years ago!

Safe and slow is the way to go

Because manatees are large, slow-moving creatures, it is important that boaters practice special caution around these gentle giants. This means slowing down in areas that might contain manatees, as well as being mindful of your fishing line and other potential hazards. (This isn’t too big of a problem for anglers—unlike shorebirds, whose presence usually indicates some fish action beneath the surface, manatees are herbivores and like to “graze” on floating plants.) If you want to get closer to manatees, bringing along a kayak or snorkeling in one of the Sunshine State’s many springs may be a good addition to your cruising and angling itinerary!

Now that you’ve learned more about manatees, head to your favorite Sunshine State waterway for a chance to see them safely in person!