This Valentine’s Day, Discover Jewelry from the Sea 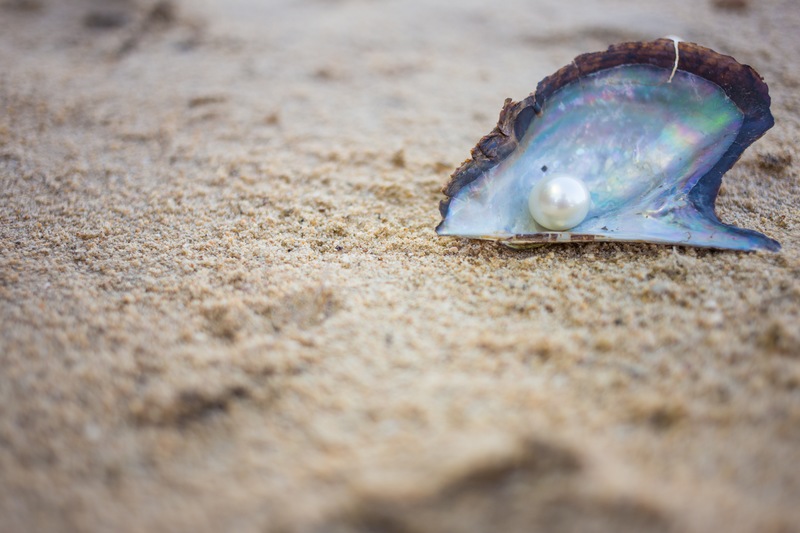 As anglers, we know the sea is home to some seriously beautiful creatures—from the glimmering green-blue flash of mahi-mahi, to the bevy of colorful invertebrates that create the coral ecosystem. And of course, this Valentine’s Day, we’re also thinking about pearls—nature’s jewelry that starts as a speck of sand and turns into a one-of-a-kind gem of the ocean.

Read on to learn more about the pearl’s unexpected journey in the ocean ecosystem!

How does nature form such a perfect, lustrous gem in the depths of the sea?

Simply—but perhaps surprisingly—it starts with a speck of sand. Or, perhaps, some other particle that makes its way into a bivalve mollusk’s shell. In an effort to prevent the irritant from causing damage, the mollusk will secrete a smooth, protective fluid around it which we’ve come to know as nacre, or mother-of-pearl. Over time, more layers will build around the particle until a more solid structure is formed. This process can take up to several years, and even when it does happen, it doesn’t always result in the beautifully shiny, sphere-shaped pearl we know and love! But when it does, well, knowing the years-long process (and pure chance) that when into its formation makes it all the more special.

Depending on the type of mollusk that forms a pearl, there are several different varieties that can form—each beautiful in its own one-of-a-kind way! These include the classic shimmery white pearl, the dark, reflective Tahitian pearl (which comes from a darker-lipped shell), and even the conch pearl! Known for its beautiful pink color and unique shape—similar to Easter eggs’ candy—the conch pearl derives from the queen conch mollusk of the Caribbean. Though it is not technically comprised of nacre the way its oyster “cousins” are, the process that goes into making it is similar. And the end results, of course, are just as striking.

Where in the world are pearls?

While we don’t recommend searching for pearls yourself (mollusks do the important work of filtering the underwater ecosystem, plus the chances of finding one with a pearl in the wild—not to mention a “perfect” pearl—are about 1 in 12,000), it can still be fun to know where they are in relation to your cruising and angling!

Hawaii and the Pacific in general tend to be popular sources for naturally formed, lustrous pearls. Those vibrant pink conch pearls we mentioned earlier hail from the islands of the Caribbean, and were popular exports among English royalty in the Victorian era.

As their name might suggest, Tahitian pearls, a.k.a. black pearls, come from Tahiti and its surrounding islands in the central Pacific. (Tip: If you ever find yourself cruising the water of Tahiti, you’ll discover a thriving angling scene characterized by clear, sparkling flats! Locals love huge snapper and bonefish, and you can venture offshore to find even bigger catches like the blue marlin. The first 1,000-lb. one to be caught by rod and reel was caught here in 1930!)

Because a wide variety of ocean animals eat mollusks, they might pick out an oyster with a pearl and not even know it! Mollusk snackers include several types of whales, walruses and even some birds who use their beaks to break open the tough shell exterior.

From your Blackfin Boat, you’re equipped to see some of the ocean’s most beautiful processes at work—from playful shorebirds dipping into the water for a snack, to the gentle rolling of waves that, over time, shape shorelines and shimmering pearls alike. It’s one of our favorite parts of cruising!