May Fish Trial of the Blackfin 272CC Model | Blackfin Boats 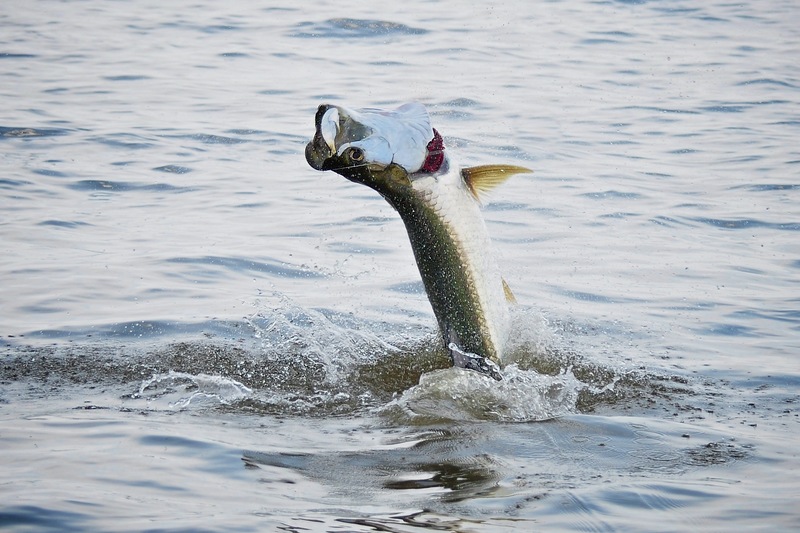 Captain Brandon Simmons had a prime float plan set for our early-May Fish Trial of the Blackfin 272. We would motor the center console 30 miles east of our Duck Key home base into the open Atlantic waters and troll the famed Islamorada Hump.

The hump, a seamount rising from depths of 700 feet to within a few hundred feet of the surface, frequently features an upwelling. Recent reports suggested the zone was swarming with blackfin tuna. But when the weather-service forecasts predicted 7-foot seas, we reluctantly chose plan B: chasing tarpon near the bridges.

Steady as a Rock

Turns out we were wise. Seas built to more than 12 feet that afternoon, and we still battled sloppy waves pounding in from all directions — a madhouse of confused chop.

We also had a big crew of nine, including photographers and models, plus their gear. As the boat bobbed near the pilings of the old Overseas Highway Bridge, angler Pierce Burns straddled the bow, casting to snapper at the structure. He seesawed at least 6 feet as tightly packed rollers squished through the stone archways, tossing the 27-footer in their frenetic path.

Once anchored, Simmons balanced at the transom, prepping three rods tucked in a tripod in one of the three shotgun rod holders. He was deftly spinning Bimini twists and tying in 50-pound leader tipped with 5/0 circle hooks. I tied a spider hitch in one. He cast a suspicious eye at it and tugged just as doubtfully at my leader connection and improved clinch knot to the circle hook. I’m nobody’s fool at fishing, but as he said, “I don’t know you.”

We didn’t know the Blackfin 272 either. This prototype is one of three in the works for the recently restructured company; the other models include a 21-footer we tested and an even larger 30-footer soon to enter the lineup. All represent the continuation of a storied brand of rugged, highly fishable and respected sport-fishers.

This is an outboard-powered vessel, though; Blackfin’s original reputation focused more on the larger inboard battlewagons. Still, in my tests at wide-open throttle in this chop (the twin 300 hp Mercury Verados pushed us to more than 61 mph), we could tell this 272 was every bit as tough as its legend demanded.

A full composite stringer grid is bonded into the hull, and carbon-fiber reinforcement makes the structure so rigid that no hatches rattled and even the rugged custom hardtop failed to shudder.

Blackfin manager of engineering Mason Cummings identified some fine points of the build for me. The 30-gallon livewell, fed by an 800 gph pump, seemed light at first glance, until we looked inside. Gemlux drains and valves — all completely adjustable from within the well — let us set the outflow and inflow at the top and bottom drains.

For our choppy conditions, we nearly closed both drains and let the overflow squeeze out the gasketed lid and bleed overboard via a clever gutter in the transom. The tank filled to the top nearly free of aeration, and all thanks only to the 800 gph pump (no expensive sea chest needed).

I found four gunwale rod holders ideally placed on each side of the aft cockpit, and three horizontal racks along port and starboard inwales. The hardtop provides stowage for more rods, and even better yet, its rocket launchers hung within reach for most of our crew.

That’s a major improvement over competitors, and Cummings wasn’t even bragging about it. He should have been. Turns out this humble “boat handler” I’ve known for several years is one of the company’s top engineers and even responsible for custom-designing all the hinges and latches on board.

“It’s really more of a team effort,” he said.

Port and starboard 54-gallon fish boxes in the cockpit sole are long and deep and macerated for quick overboard drainage. The anchor locker boasts an optional windlass and comes with an extra slot for a fluke anchor to deploy astern.

While our fishing trip produced mostly mangrove and mutton snapper, we also released nurse sharks and a small tarpon boat-side. The 272’s tall freeboard seemed intimidating at first, but at 5-foot-11, I could still reach the water to leader a fish.

The 272 I trialed was clearly a fishing machine, adorned with dual Raymarine displays and a small VesselView gauge. The helm was enclosed in glass but came with an electrically operated window vent to usher in a breeze on hot days.

The bolstered dual helm seat sports armrests, and yes, Blackfin is making the custom hardware with a laser cutter. The hinges for the extra-wide transom seat are cut there too, and unlike most, the seat back is a real seat back, not a vertical transom bolster. The seat pulls out quickly with one hand and slaps back in place, one-handed, so you can tend to a fish or rod.

When a family fishes, nobody’s happy unless everyone is comfortable. The 272’s comfort factor carries forward to the bow seating. Two smart inserts in the coaming bolsters slip out of their sockets and fit at 90-degree angles to the foredeck cushions. Now, instead of a deep-padded coaming bolster, each makes a seat back for forward-facing lounges.

Although we remained well within our safety parameters with our crew of nine, we were well above what most would consider an efficient fishing crew. Yet Blackfin’s engineers had preserved amazingly wide walkways between the gunwales and helm; two people could easily pass heading fore and aft.

On the starboard side, a 4-foot-wide console door opens into that walkway on custom hardware that allows the door to swing forward in a manner more akin to a sliding door than a hinged door. Dual levers rigidly latch it down. This configuration allows hooked-up anglers or a gaff man to work freely there, even if the door is open.

When you choose a boat like this one, it’s not enough to buy durability, fishability and performance. You want lasting good looks too. The 272 accomplishes that in multiple ways. All the multicolored upholstery is crisply designed, with drum-tight vinyl and knifelike corners. The gunwales feature highly polished Blackfin-embossed pull-up cleats. All the custom hinges and hatches glisten.

The hull’s black gelcoated sides are smooth enough to read a paper in their reflection. The glossy hardtop supports sport two durable, black powder-coating treatments (you can opt for white) and two clear topcoats so gear and rods won’t gouge them.

My trial of the 272 clearly revealed the vessel as a solid competitor in the sport-fishing market. It also has additional enticements to pamper families. And this Blackfin team is just getting started.